The spread of snacks and goodies isn’t your standard college fare. No Doritos, no chips, no sodas.

Instead, the unusual buffet includes Chinese rice cookies, candied ginger strips, Jell-O cups in flavors most Americans have never experienced – mango and litchi — and a bag of what looked like orange gummy worms, which turned out to be strips of dehydrated sweet potato.

Welcome to just another coffee and conversation hour on Valencia’s East Campus – designed to give the college’s international students a chance to meet and mingle with American students.

Of course there was coffee – from Ethiopia — but students also could choose cans of coconut juice and mango juice, bottles of flavored seltzer water, and a popular Asian drink featuring basil seeds and honey. 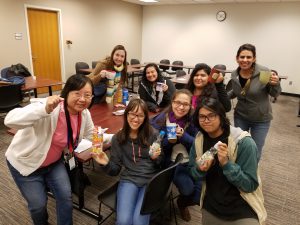 “Our theme this week is Asia because Chinese New Year is coming up,” says student organizer Kim Dang. Dang, whose family is Vietnamese, is a Valencia student who helps lead the weekly coffee and conversation hours.

To kick off the meeting, and serve as an icebreaker, Dang launches into a series of trivia questions about Chinese New Year.

Although Americans typically refer to the holiday – more than a week of festivities that begin on Feb. 5 this year – as “Chinese New Year,” Kim notes that the holiday, which designated the beginning of spring, is celebrated throughout Asia.

The 12 students at the meeting answered questions about Chinese New Year, ranging from the zodiac animal designated to represent 2019 (It’s the Year of the Pig); how many zodiac animals are there (12); and, what holiday is celebrated 15 days after Asian New Year (Lantern Festival).

After the icebreaker and ritual eating of snacks, the students break into small groups to discuss a series of questions. Today’s topic: Are you an introvert or extrovert? Most of the students, it seems, are introverts – or ambiverts, both introverted and extroverted at times. But they all appreciate having friends who are extroverts. For 20 minutes, they sit at tables and talk, before eventually breaking up and heading off to more classes or getting another cup of tea.

To do that, Bridges International organizes coffee hours, game nights, shopping excursions and group nights out at local restaurants or soccer days, to give students a taste of American food and culture.

For international students studying at Valencia, the Bridges International group has been a godsend.

“I only have friends at Valencia. Other than that, I am at home studying or being by myself,” said Alejandra Silva Meza, a student from Colombia who is studying elementary education.

“The statistics are very high – they show that many international students never step into an American home,” she says. “And that defeats the purpose of them studying abroad.”

Getting to know you 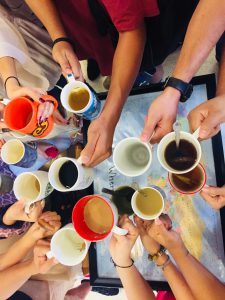 At coffee hour, participants are both international students – many of whom are eager to meet friends and participate in activities on campus – and American students interested in other cultures.

Kathy Garcia, 25, is of Mexican descent and lives with her family in Orlando. For her, the club has opened the door to new friendships. Through the club, she met a student from Russia who has become a good friend. In addition to club activities, they’ve gone to plays together and out to eat. “She loves burgers!” says Garcia. “And she didn’t really understand tacos. But especially not hot sauce. They don’t have hot sauce. I had to explain that there are different levels of heat and different kinds of hot sauce.”

Dominick Padilla is also a regular. Born and raised in the United States, Padilla spent more than seven years of his childhood abroad, in Japan and South Korea, because his father served in the U.S. military. Indeed, he’s a whiz at the day’s Chinese New Year trivia because he spent so much time in Asia.

For instance, when Dang says that Asian New Year is a time when family members all return to their hometowns, Padilla chimes in. “Oh yeah, the trains are absolutely packed,” he says. “Everyone goes home.”

Throughout the 90-minute gathering, students pop in and out, depending on their class schedules. Kevin Torres, a Wellness ambassador, drops in to meet others. And two students at the most recent coffee hour came from a New Student Experience class. A new international student, a woman from Vietnam, comes to the coffee hour and sticks close to Dang, whose family is from Vietnam.

For the international students – and the Valencia students who transfer to UCF — the conversations and coffee hours can continue. At UCF, the Bridges International chapter includes a number of former Valencia students, says Flores. Students who transfer to  other colleges and universities may also get to continue with Bridges International, because the organization is the organization also has chapters at colleges and universities around the United States.

But at Valencia’s East Campus, the coffee hour is a relaxed time for real conversation, uninterrupted by cell phones or distractions.

“What’s nice about conversation hour is that it’s a safe place for them to just be themselves,” says Flores.