Cooper Smith is an anomaly in his family – a redhead in a clan full of people with black or brown hair.

Curious about his heritage, Cooper, an honors student at Valencia College, has embarked on two research projects that will teach him more about his ancestral background.

“When no one else in your family has red hair, it makes you really curious  about where that came from,” he says.

The first is his formal honors research project. For that project, Cooper is investigating the different cultures that may have influenced the ancient Celtic peoples. 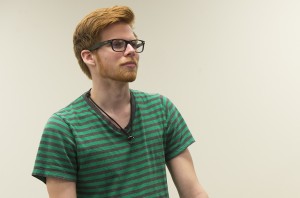 And, because he doesn’t know much about his family’s heritage, Cooper has launched into another research project: a DNA study of his own ancestry.

To find out where his family hails from, he has sent a sample of his DNA (taken by wiping a cotton swab on the inside of his cheek) to the National Geographic Society in Washington, D.C.  There, a team of scientists is using DNA samples from people around the world to compare DNA strains and determine where people originated from, based on their shared chromosomal traits.

Originally designed to map the movement of indigenous peoples, the National Geographic project has expanded and now is working to map the migration of humans from Africa to the far corners of the earth.  Participants such as Cooper Smith are contributing their DNA to the research project, but in return will learn about elements of their own ancestry.

Scientists at National Geographic run a comprehensive analysis to identify more than 3,000 genetic markers on participants’ mitochondrial DNA, which is passed down each generation from mother to child, revealing a person’s direct maternal deep ancestry.  For male participants like Cooper, the team also examines more than 10,000 markers on the Y chromosome, which is passed down from father to son, to reveal direct paternal deep ancestry.  The team also looks at more than 130,000 other markers from across the entire genome to reveal the regional affiliations of ancestry, offering insights into ancestors who are not on a direct maternal or paternal line for both males and females.

This summer, Smith, who’s 19, will receive the results of his DNA tests. And as he accumulates information, he’s adding it to a web page that he’s created to document his findings.

“The only thing I know about my family’s history is from word of mouth,” says Cooper. “I know my grandmother was Cuban. Her family came to Cuba from the Canary Islands. And my grandfather on my mother’s side was Russian. His grandfather came here  and changed the family’s name,” he says. “But on my father’s side, I don’t know much, so I’m very interested to learn about it.”

The two research projects, which he has undertaken as part of his classwork for the James M. and Dayle L. Seneff Honors College, have inspired Cooper to think about the broader field of anthropology and archaeology.

“I originally planned to go to the University of Central Florida, but given my major, I’m now looking at multiple schools,” says Cooper.  Among those on his list: Rollins College in Winter Park, the University of South Florida in Tampa and University College of London.