Three years ago, Paula Souza was at a crossroads — and occasionally wondered if she’d made a mistake.

After all, a decade ago, Souza had a promising future. In her mid-20s, she was on her way to graduating from law school in Brazil. She had good grades and a scholarship.

So when she was 26 years old and nearing the end of her law school studies,  her parents surprised her with an incredible gift – the chance to come to Orlando and work at a local theme park as part of a student exchange program.

Souza was elated. It wasn’t the Disney program – she was, in fact, working at Old Town in Kissimmee. But working at the park would give her the chance to learn English, which is considered a valuable skill in the Brazilian workforce.

After working at the attraction for four months, she returned home and finished law school. But before she started studying for her law school specialization, she decided to come back to Orlando for one more stint as a student worker at Old Town. This time around, she really got to practice her English, working as a ticket attendant and learning many of the jobs at the park.

And after that, she applied for and got a spot in the Disney College Program.

“I am a Disney fan and have been since I can remember,” says Souza. “So it was pretty much a no-brainer that I wanted to take the opportunity to come and do the Disney program in 2008. It was a six-month program where I was also going to Rosen College and I took a few classes on hospitality management…I understand that it has no relation to law school, but it was a dream come true to be able to work for Disney. Now I was not only learning English in everyday life, but I was given the opportunity to be in school here. That was a huge deal.”

Meanwhile, the economy in Brazil – and around the world – was beginning to crash, due to the worldwide recession. But while the U.S. economy has rebounded since then, the Brazilian economy hasn’t. So Souza decided to stay in the United States.

“Rio was becoming a very dangerous city. The idea of being able to create a life here sounded pretty good to me,” says Souza. “So I started the green card process.”

However, as the years ticked by and Souza struggled to make ends meet, she began to wonder if she would have been better off staying in Brazil.  “I left Brazil after I passed the equivalent of the bar exam. I could have had my license and practicing,” says Souza. “But the economy in Brazil went  down very hard and most of the people I went to college with are struggling right now.  I will never know. I could have hit the jackpot, but who knows? I could be in the same position as my classmates.” 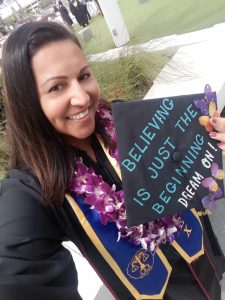 Instead, she kept plugging away in the hospitality industry. But in 2015, she decided to take a chance – so she drove to Valencia’s West Campus and met with a career advisor.  “I finally put in my mind that I really wanted to go back to work with law. I’ve wanted to work in law since I was 12,” she says.

The career advisor asked if she wanted to go to law school in the United States – or if she would consider studying to become a paralegal. She then explained what a paralegal does, which appealed to Souza. “My skills have always been in exhibits and evidence, organization,” says Souza. “We don’t have paralegals in Brazil; that work is usually done by law school interns.”

From the introductory class, Souza was hooked. And shortly after Prof. Wendy Toscano, an attorney and chair of the paralegal program, helped the students create resumes, Souza spotted an entry-level position on Valencia’s Paralegal Studies private Facebook group. She emailed her resume and crossed her fingers.

The site, which is open only to Valencia’s current paralegal students and recent graduates of the program, is popular with law firms in the area that are searching for paralegals. One reason, says Toscano, is because Valencia’s paralegal studies program is approved by the American Bar Association.

Souza quickly landed the job at Orlando law firm Dean, Ringers, Morgan and Lawton – and worked there for a year, while still studying at Valencia to earn her Associate in Science in paralegal studies.  In the meantime, she reached a few more milestones. She became a U.S. citizen and bought a home.

In May 2019, Paula Souza graduated with her paralegal degree and proudly wore a sash from   Lambda Epsilon Chi, the National Honor Society in Paralegal/Legal Assistant Studies. Paula received the award for being in the top 10 percent of her graduating class.

But her journey with the law is just beginning.

Today, she works for a larger firm, Goldberg-Segalla, where she believes she’ll have the opportunity to grow and learn.  “They have 21 offices all over the United States and they practice everything,” says Souza. “I would never imagine in my wildest dreams that I would be working in a nationwide law firm in the United States.”

At age 37, she knows it’s not too late to change your life – and chase your dreams.

“The paralegal program made my dreams come true,” she says  “I know that sounds cheesy, but I am truly living the American dream, thanks to the career advisor who explained an opportunity to me and to all professors who helped me along the way.”