Carol Murray isn’t wasting any time jumping into her new career as a paralegal.

After graduating from Valencia College on May 6, 2018, she started work as a paralegal at one of downtown Orlando’s largest  law firms the next day.

“It almost brings tears to my eyes to say, ‘I am a paralegal,’” says Murray, who’s a grandmother. “I have this career identity. It means so much to me.” 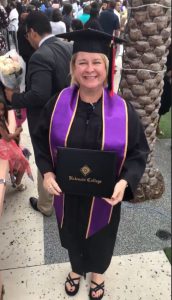 For Murray, the journey to a college degree has been a winding path. Raised in Kansas, she and her husband raised their kids in South Dakota and Utah. She twice tried to go to college — once as a young mom and again as a single, divorced mom — but raising kids and attending college proved challenging.

Yet, for most of her adult life, Carol worked, primarily in the real estate field, in jobs ranging from  receptionist to  real-estate agent. So it only seemed natural that when she and her second husband moved to Florida, Carol continued working in real estate. Unfortunately, in 2016, Carol got laid off, when the contractor she worked for lost a bid to rehab foreclosed homes.

That’s when fate stepped in. When Carol went to CareerSource Central Florida to look for a new job, the agency offered Carol a chance to retrain for a new career.

After researching her options, she decided to study to become a paralegal. “I felt like becoming a paralegal would play to my strengths,” she says – and she chose Valencia’s two-year degree program in paralegal studies because she thought a degree would make her more marketable. Plus, Valencia’s paralegal program is approved by the American Bar Association.

When classes began in fall 2016, Carol felt she’d found her purpose. “I really enjoyed the real property classes, but the legal research classes were great. I thoroughly enjoyed doing research,” she says. “It was just a really good fit.”

A year after she started the program, Carol’s Valencia professors helped her land an internship with Red Lobster’s commercial real-estate section, which handles leases for restaurant locations.  One of the Red Lobster attorneys serves on Valencia’s advisory committee, which helps the college ensure that the program and courses remain relevant to practicing attorneys.

And, thanks to another Valencia connection – an adjunct professor who is an attorney at Bogin, Munns & Munns – she got to do a job shadow at the Orlando law firm.

As she approached graduation, Carol learned through her Valencia connections that Lowndes, Drosdick, Doster, Kantor & Reed – one of the city’s biggest law firms — was looking for a commercial real estate paralegal. Although Carol worried that she didn’t have enough experience for the position, she applied anyway. “I interviewed on a Thursday and they offered me the job on Monday,” she says.

Looking back, she’s grateful for the close connections that she made with the Valencia faculty – and for the connections they have within the Central Florida legal community.

“I loved the program; the professors are great; they’re very invested in what we’re doing. For them to recognize that I was looking for something in particular and reach out to me … that says a lot right there,” says Carol, whose grades earned her an honorary membership in Lambda Epsilon Chi, the national honor society for paralegal students. “ I feel like with this program, because the classes are so small, there’s so much more personal connection that it really makes a tremendous difference. You get to know the professors and they get to know you.”

At commencement, Carol celebrated with her husband and her daughter, who brought Carol’s newest grandchild for the ceremony. Carol decorated her graduation cap in advance, decorating it with the slogan “It’s never too late.”

“It’s been such a good experience. I couldn’t have scripted the ending any better than what happened,” she says. “I am so happy and proud of myself.”