Valencia College News > Looking for the Perfect Christmas Movie? We’ve Got Everything From Fun to Feel-Good

Looking for the perfect movie to watch this holiday season? We asked Valencia’s resident film expert, Eric Fleming (who serves as program chair for Valencia College’s film production technology program), for his thoughts.

They’re easy on the eyes, ears and heart. The plot lines of these films are not terribly challenging and we know every twist by heart – allowing us to freely doze on the couch under the influence of too much eggnog, ham, and fruit cake. I don’t know what kind of tree bears the weird fruit that goes into that cake, but it must be pretty colorful. Only my dad eats it in our house.

There is comfort in tradition, in the familiarity of holiday movies. Like visiting your childhood room and nothing has changed. These movies hold our memories, release our dreams. The experience allows us to return to a simpler time when we believed that an elf doesn’t have to make toys if he is “not happy in my work, I guess.” And deep down, we are still hopeful that Hermey the Elf went on to grow a thriving dentistry practice.

Studies have shown holiday film viewing is already up this year. Why do you think that is?

That’s interesting. And no surprise! It has been a pretty rough year with a global health crisis and a bitter election. Only Hallmark Channel’s relentless Countdown to Christmas – holiday movies from October through Jan. 1, 24/7 – can compete with the stamina of election coverage. I’ve read that Hallmark draws over 70 million viewers during this holiday countdown. Those numbers will undoubtedly be up, this year.

Most plots in holiday movies are tied up in a neat bow with a happy, hopeful ending. There is always a tinge of relatable melancholy but a consistent undercurrent of kindness. Neighbors are kind to each other. The films depict classic, mythic stories of self-discovery, reunions, deeper truths, celebrations of the innate goodness of people. If our recent election process was a holiday movie, people with Biden/Harris signs in their yards would go caroling, hand-in-hand with their Trump oversized-flag-flying neighbors. And as they all sing “Silent Night,” in perfect harmony – all the votes are counted and a gentle snow falls on the state of Florida, even in Miami-Dade.

I do believe there is something to be said for the healing power of narrative. The same stories, archetypes, motifs and themes have persisted for thousands of years. We share a collective unconscious, a desire to see these journeys of self-discovery, these quests where the good and just prevail and love is the unifying principle of the universe. When we look at narrative architecture from cave drawings, through Greek theater, myths, song lyrics, music and film… we must realize that, regardless of what politicians are represented on our front lawns, we share more common beliefs, struggles and dreams than the armor of our disparate opinion reveals.

What holiday movies would you recommend to lift people’s spirits?

Well, you’re asking a film geek. So, of course, it’s hard to limit the list. But my first pick has to be A Christmas Carol. And no

disrespect to the spirited pluck of the Muppets who adapted the famous Dickens’ tale, but I love the version with Alastair Sim. I just lost my brother in July and it was his tradition of an annual screening that I’ll continue to honor. And no one makes that amazing turn from heartless Scrooge to skipping and giggling old fella’ like Mr. Sim in the 1951 classic.

If a little misanthropy lifts your spirits, put Bad Santa in the queue. It always made me feel a little oily but to each his own. You can always cleanse yourself with The Bells of Saint Mary’s in which Bing Crosby’s Father O’Malley clashes, often breaking out into song, with the strict educational approach of Ingrid Bergman as Sister Mary Benedict. I wouldn’t say it’s a great film but it was required viewing in my Irish Catholic household. It also created a great deal of inner conflict and guilt for me because of my huge crush on Ingrid Bergman who was depicting a wholesome nun on screen.

Black Nativity is a musical based on a Langston Hughes play and features some incredible voices and Angela Bassett, who never ages, and Forrest Whitaker who classes up every scene in which he’s ever been featured throughout his career. It’s also nice to celebrate some diversity rather than the classic white Christmas.

Christmas Story is a must-see, having inspired countless, panicked children to test the theory and have their tongues stuck to frozen poles. The father’s “swearing” and the lamp, of course, that arrives in a box labeled, “Frah-jee-lay,” because it’s Italian.

I love the chaos and dysfunction of Jodie Foster’s Home for the Holidays. Everyone relates in some way to that delightful mess of a Thanksgiving dinner. And Holly Hunter is in it. I’ll watch anything that Holly Hunter is in. She is an underrated powerhouse of an actor. 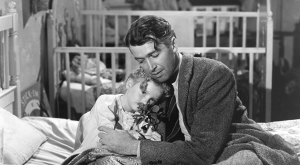 It’s A Wonderful Life is a must see. America’s most beloved Everyman, Jimmy Stewart with his endearing stammer, realizes his self-worth through the gift of seeing what the world would be like if he never existed. It’s always comforting to enter director Frank Capra’s world where the integrity of the little man triumphs over wealth and privilege.

Love Actually is a holiday favorite. Writer, director Richard Curtis writes snappy, sharp dialogue with some teeth but his message is always gentle and kind. For all of you who suffer from OCD, however, beware of the film’s song, performed by Bill Nighy who steals the movie as an ex-junkie rocker. The song will stick in your head until Easter or Passover… in fact, it’s running over and over in my head, right now. It might be a better song for our Biden/Trump carolers to sing.

Tim Burton’s Nightmare Before Christmas is just plain fun. Polar Express – my kids love it but I can’t get past that off-putting Uncanny Valley of expression in the animation that comes so close to real but just isn’t. For animation, I love the ole’

Rankin/Bass classics like Rudolph and Frosty and my personal fave, The Year Without a Santa Claus. Who can resist the Heat Miser vs. Snow Miser and their uncanny resemblance to Attorney General Bill Barr vs. former FBI director, Robert Mueller.

But as for animation and the holiday feels, A Charlie Brown Christmas hits the spot like a medicinal hot toddy or hot cocoa, depending on the age of the viewer. It’s just a wonderful film with an amazing soundtrack. I get weepy every time Linus wraps his blanket around that sad, little tree and says, “It’s not bad at all, really. Maybe all it needs is a little love…” which is, basically, perfect advice for all of us, this holiday season.