Valencia College News > To NASA and Beyond: Valencia Grad Has Set His Sights on the Stars

Michael Gutensohn is, at the moment, living in an RV parked in the side yard of a home.

But don’t feel sorry for this 2015 Valencia College grad.

He is living his dream.

Gutensohn, who graduated from Valencia’s Interdisciplinary Honors Program, is now in his first year of graduate school at the University of California, Berkeley, where he’s studying human-computer interaction in UC Berkeley’s School of Information.

It’s a long way from Gutensohn’s high-school days in Celebration and his early formative years at Valencia, but he is proud to tell his fellow grad students and anyone who will listen that he got his start at a community college.

“Some people will try to hide the fact that they went to community college before they came here (UC Berkeley) — not me. I’m very proud to say that I went to Valencia,” Gutensohn says. “Some of the best professors I ever had were at Valencia. I got a lot of one-on-one time with the professors. They were very clearly passionate about what they were doing – and that’s contagious.”

But how Gutensohn ended up in Berkeley is another story.

As one of 10 kids growing up in Osceola County, Gutensohn knew, as he approached high-school graduation, that if he went to college, he would have to find a way to pay for it himself. Valencia College was the most affordable option, so he began classes at Valencia’s Osceola Campus and began what would become a slate of part-time jobs.

“I bagged groceries at Publix. I managed a balloon store. I lifeguarded, I worked at IKEA. I worked at Books a Million. I was all over the place,” he says, laughing. “I would go where they paid me better and the schedule worked best for my classes.”

Though he loves writing and literature, Gutensohn focused his studies on computers and programming —in part, because he knew he would struggle to pay back student loans as an English teacher. 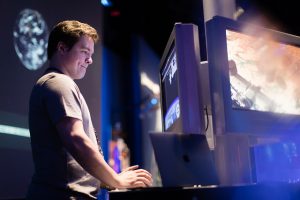 That’s why, after one semester at Osceola Campus, he began taking most of his classes at the West Campus, where he took computer courses and became a part of Valencia’s Seneff Honors College – and its challenging and well-known Interdisciplinary Honors program (IDH).

Although Gutensohn considered himself an underachiever in high school, IDH appealed to him. “I’ve always been interested in the pursuit of knowledge,” he says. “And, growing up in a family of 10 kids, I thrive on debates and conversation. IDH seemed like the most interesting choice for me.”

As it turns out, the choice was providential. In the IDH program, the Valencia humanities professors “opened my eyes to the interdisciplinary nature of everything.”

“Right now, I’m studying a bunch of visual design principles. You’re programming humans as much as you’re programming computers, because we have to be able to guide people to use the software,” he says. “There’s a lot of psychology and art in it. And IDH opened the door to that, for me.”

Shooting for the stars

After graduating from Valencia College, Gutensohn transferred to Rollins College’s Hamilton Holt School, primarily because the Rollins evening program offered him what he found at Valencia – small classes and the chance to focus on computer science.

(The Hamilton Holt School no longer offers a computer science major to students in the evening program.)

“The Rollins computer science program was small — even compared to Valencia. What I really gained there was the opportunity to be part of a small cohort. I got to know my fellow classmates and I got to know my professors on a more personal level.”

While at Rollins, he became interested in human-computer interaction, thanks to professor Valerie Summet. But it was a chance visit to Kennedy Space Center that changed his life’s trajectory – and launched him on his career path.

“I had always wanted to go to Kennedy Space Center, but had never been. My little brother was 11 and wanted to go, so I took him. I went and I thought it was going to be the lamest thing in the world, but that it would be cool for my younger brother,” says Gutensohn. “Instead, I went in and I was just blown away by all of it.”

“When we left, as I was walking out with my little brother, I said, ‘I’m going to work here,’ ” he recalls. “I know that sounds cheesy — like it never happened — but it really did.”

And so began a series of NASA internships – the first at NASA’s Jet Propulsion Laboratory in Burbank, Calif., followed by two at Kennedy Space Center. And, in summer of 2018, after graduating from Rollins, Gutensohn returned to JPL for another internship. 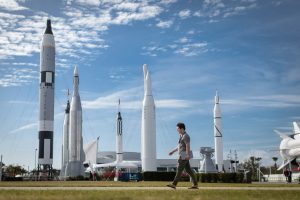 Meanwhile, he began applying to universities with good graduate programs in human-computer interaction. He quickly zeroed in on UC Berkeley because the program was small – and had the same intimate class feel that he’d experienced at Valencia and Rollins.

After learning he’d been accepted at UC Berkeley, Gutensohn launched yet another project – building his own graduate school apartment.

Because renting an apartment in Berkeley would cost a fortune, Gutensohn, bought an old RV and began renovating it – inspired, in part, by stories about a Google employee who lived in an RV in the company’s parking lot.

“I’d always been very interested in the tiny house movement, even before I started going to  school. But building a tiny house is very time-consuming and very expensive. The second best thing would be to buy a school bus and renovate that — and the third best thing was gutting an RV and renovating it.”

So he bought a 1989 RV and stripped the interior to make way for an updated kitchen, a sofa and a platform bed. Then, in a cross-country road trip worthy of a movie – with the RV breaking down in Pensacola, Fla., El Paso, Tex., and Las Cruces, N.M. – Gutensohn finally arrived in Berkeley, where he rented the side yard of someone’s home. Now his RV is parked in the side yard and he’s happily ensconced in his own private getaway.

“I’ve got power, I’ve got water. I’ve got a desk and office chair in my RV. I’ve got a kitchen. It’s like a tiny house or a very small apartment,” he says. But best of all, he doesn’t have to share his space. “Growing up in a big family, having my own space is very attractive to me. Not having roommates and not having to deal with someone’s house rules is very important to me.”

Meanwhile Gutensohn is plotting his path through the stars – and a career at NASA. 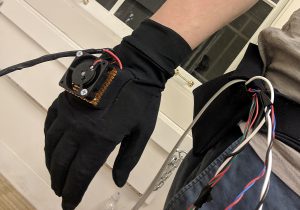 Next up is a summer internship at Apple, where he’ll be working as a software engineer.

“(Grad school) is hard; it’s tough work. But I’ve also been able to take some fun courses, where I get to build things,” says Gutensohn. “As soon as I got here, I knew I made the right decision.”