Considered one of the rarest animals on the planet, Lonesome George was a solitary tortoise. When the Pinta Island tortoise died in June, he left no descendants – and scientists believe his species is now extinct.

That’s not because scientists didn’t try. For years, they attempted to breed George with female tortoises from some of the 15 subspecies of tortoises found on the Galapagos Islands, but with no luck. 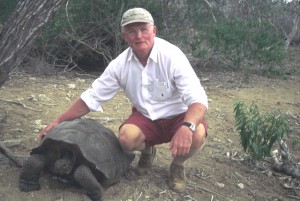 “He had one unhappy defect, that he had no interest in reproducing,” says internationally renowned zoologist Peter Pritchard. “It was a big enigma. What do we do about this?”

On Oct. 30, at 1 p.m., Pritchard will speak at Valencia College about Lonesome George, who was discovered in 1971 when men who were goat-hunting on Pinta Island almost shot the tortoise, mistaking him for a goat. George – believed to be the last of the Pinta Island tortoises — was taken to the Darwin Research Station on the Galapagos Islands, where the Galapagos National Park Service cared for him until his death this year.

Pritchard, who has written 11 books about tortoises and has appeared in a number of documentaries, will also speak about the fate of the Galapagos tortoises.

A native of England, Pritchard earned his bachelor’s and master’s degrees in chemistry and biochemistry at Oxford University. He earned his doctorate in zoology at the University of Florida, where he studied sea turtle biology. He has worked for the World Wildlife Fund, the Florida Audubon Society and is currently director of the Chelonian Research Institute in Oviedo. He also serves as an adjunct professor at Florida Atlantic University and at the University of Central Florida.

He has been recognized as a “Champion of the Wild” by the Discovery Television Channel, and as a “Hero of the Planet” by TIME Magazine.  In 2001, he was declared “Floridian of the Year” by the Orlando Sentinel newspaper.

Pritchard has developed the art of conservation without confrontation, recognizing that developing a consensus with one’s opponents may be the only way of establishing lasting changes. He has applied these techniques both in Florida and around the world. In the 1980s, Pritchard began a series of discussions with the owner of a Mexican marine turtle slaughterhouse – a man whom many conservationists said would never believe in the conservation ethic. Eventually, however, his conversations with Pritchard convinced him to leave the industry and his slaughterhouse eventually closed.

Pritchard has also worked with the Arawak people of Guyana for many years, firmly steering them towards a more protective attitude to the wildlife species, especially marine turtles, which they depend upon. This project attracted international attention, and was described in the National Geographic book Hidden Worlds of Wildlife.  It was also featured in a special for the Paris television network Canal Plus (shown widely in Europe), and the Guyana conservation program has resulted in Pritchard being selected as a featured conservationist for the Canadian television series Champions of the Wild, shot on-site in Guyana in May 1998, and already aired extensively in Canada, the United States, and the United Kingdom.