The one-day event – which is both a showcase of student films and a fundraiser for the film program — gives movie buffs, as well as current and former students, the chance to watch short films produced by current Valencia College film students, and learn some of the technical aspects of filmmaking in short workshops held between screenings. 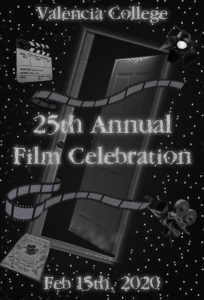 Throughout the day, film students will be selling commemorative film celebration shirts, popcorn and other treats at concession stands. All proceeds from the film celebration will be used to fund students’ final short film projects.

This year’s celebration will culminate with the 7:45 p.m. showing of “The First of May,” a feature film that Valencia students worked on in 1999, which starred Mickey Rooney (“Breakfast at Tiffany’s”, “Babes in Arms”), Julie Harris (“East of Eden, “Gorillas in the Mist”), baseball legend Joe DiMaggio and Dan Byrd (“Easy A,” “A Cinderella Story,” “Cougar Town”).

In the film, which was directed by former Florida film commissioner Paul Sirmons, 11-year-old Cory (Dan Byrd) runs away from his foster parents and meets Carlotta (Julie Harris), a feisty lady fleeing her nursing home. The two team up and decide to chase their common dream of joining the circus. They track down a traveling show run by frenetic boss Ed (Mickey Rooney) and are shown the ropes by wise clown Dinghy (Charles Nelson Reilly). By entertaining others, they find the love they had been missing.

For more information and to purchase tickets please visit:

Get equipped with the importance of the slate (often referred to as clapper) and have the opportunity to use it.

Learn what the term “pulling focus” means for the camera and get a chance to practice the art form.

Boom in the Shot

Hear how professionals capture good sound and how to operate a boom mic on set.