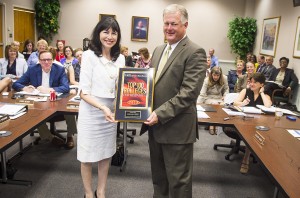 Orlando, FL – Valencia College ranks 17th in the nation for the number of degrees awarded to Hispanic college students, according to the annual Top 100 Colleges for Hispanics list.

The rankings were compiled using data from the U.S. Department of Education’s National Center for Education Statistics. The magazine relied on data submitted for 2011.

“At Valencia, we recognize the growing diversity of our community and we are proud to be the first step in many Hispanic students’ journey to college,” said Dr. Sanford C. Shugart, president of Valencia College. “Valencia is focused on helping students succeed and these rankings underscore that commitment. “

Valencia is one of 356 colleges and universities recognized by the U.S. Department of Education as a Hispanic Serving Institution (HSI). Defined as nonprofit degree-granting institutions with full-time equivalent undergraduate enrollments that are at least 25 percent Hispanic, HSIs educated more than 1.4 million Hispanic undergraduates and graduates in 2011-12. These institutions represent 10.5 percent of the nation’s nonprofit colleges and universities, but serve 56 percent of all Hispanic students.

In 2011, there were 52.5 million Hispanics living in the United States, plus an additional 3.5 million in Puerto Rico. Hispanics represent 17 percent of the U.S. population and their numbers have grown 45.5 percent from 2000 to 2011, the largest growth among all population groups.