This 1950’s-era romantic-comedy tells the hilarious tale of a husband whose wife and child have gone to their summer home, where he will meet them on weekends. During the week, he is staying in their city apartment. But when a beautiful single neighbor moves in, his vivid imagination takes over and a series of innocent events result in a rollicking comedy. 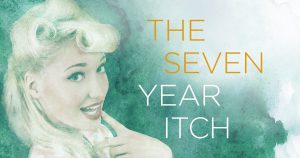 Most Americans are familiar with the 1955 Billy Wilder film version, featuring the iconic photo of Marilyn Monroe standing above a subway grate. But the play, written by George Axelrod, is significantly different and was a hit on Broadway, running for almost three years.

This production, directed by Eric Pinder, is also a salute to the past. In this, Valencia’s 50th year, the college is staging a play that the Valencia theater department first produced 25 years ago.

Tickets are $12 for general admission and $10 for students, alumni, staff and seniors. To purchase tickets, click here. Use the promo code “VALENCIAWEB” to receive $2 off each ticket.

AUDIENCE MEMBERS: Please note that due to the intimate setting of the Black Box Theater, late seating cannot be accommodated. Please arrive at least 15 minutes prior to show time.