The Valencia College Theater will present the first staging of playwright Jack McGrath’s original play, “Eros in Veracruz.” Show times are April 3-6 at 7:30 p.m. There will be a matinee performance on Sunday, April 7, at 2 p.m. The April 5 performance will be followed by a question-and-answer session with the playwright and the actors. 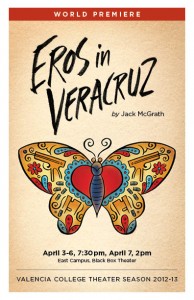 “Eros in Veracruz” is a drama about the far-reaching tendrils of Mexican drug cartels and the story of an American who rescues a young Mexican woman from being beaten by her cartel-leader boyfriend and gets caught up in the violence. The cast includes Hispanic actors, and the cast speaks in Spanish and English.

This is the third time that McGrath, who operates an Orlando digital media production company, has won Valencia’s original play competition. His play, “Love/Now,” was produced at the college in 2005 and “The Lazarus Treatment,” which won the play competition in 2007, was also staged by Valencia’s theater department.

The premiere is being directed by Julia Allardice Gagne, Valencia’s artistic director. The scenery was designed by Greg Loftus, a Valencia College theater professor and professional set designer.

All performances will be held in the Black Box Theater on Valencia’s East Campus, 701 N. Econlockhatchee Trail, in Orlando. General admission tickets are $12; tickets are $10 for Valencia College staff, senior citizens and students from other colleges. Admission is free for Valencia students with a valid college ID.

Seating is limited in the Black Box Theater, so theater managers suggest that you arrive 30 minutes before the curtain time. To purchase tickets, go to www.valenciacollege.edu/arts or call 407-582-2900. To receive a $2 discount on each ticket purchase, use the code VALENCIAWEB.