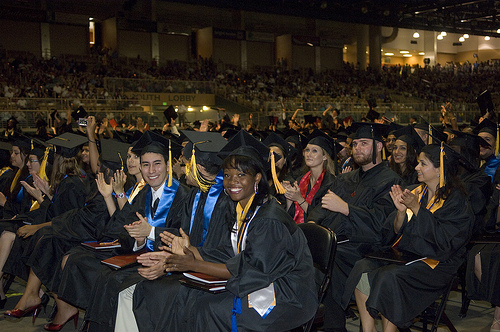 Orlando, FL – Valencia College ranks fourth in the nation for the number of associate degrees awarded to students, according to a ranking of almost 3,000 colleges and universities published this week by Community College Week.

To compile its annual Top 100 rankings, the editors of Community College Week used data from the U.S. Department of Education’s National Center for Education Statistics and focused on degrees conferred during the 2011-12 academic year. In that year, Valencia awarded 7,974 associate degrees, including 3,674 earned by minority students.

The rankings were published on June 24.

“Valencia’s continued focus on student success is paying off,” said Dr. Sanford C. Shugart, Valencia College president. “For the past decade, the college has targeted its efforts toward helping all students succeed. These rankings underscore the role that Valencia plays as the first step to college for many students in Central Florida.”

The college also ranked second in the nation – out of 5,485 colleges and universities and other educational institutions — in the number of one-year certificates awarded.

DirectConnect to UCF, a long-standing partnership between Valencia and the University of Central Florida, has contributed to Valencia’s high transfer rate, which is considered to be among the highest in the nation. DirectConnect to UCF guarantees that Valencia graduates will be accepted and receive accelerated admission to UCF. Since the program’s inception in 2006, more than 16,000 students have transferred from Valencia to UCF.

In 2012, Valencia College’s DirectConnect to UCF program was selected by Excelencia in Education, a Washington, D.C.-based organization, as the nation’s top program for increasing academic opportunities and success for Hispanic students at the associate level.