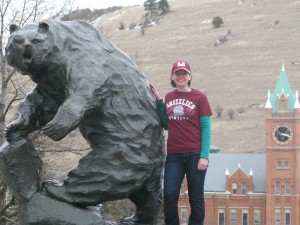 College students routinely dream of going away to school — usually to a college that looks like a postcard from New England.

Mary, you see, dreams of becoming a vet, specifically a large animal veterinarian, someone who treats horses and cattle.  So while her classmates may grow wistful over the thought of attending a college with lots of bricks and ivy, Mary set her sights on the University of Montana.

And, now, thanks to the help of Valencia students and faculty,  she’s attending classes there.

Her story started in Orlando, where Mary was home-schooled and attended Circle Christian Academy.  Interested in animals, she and her mom convinced the family vet to let Mary shadow him. So, starting at age 12, she went to the vet’s office once a week and helped out for a few hours. By the time she was 18, she was working as a kennel technician. She bathed the dogs, fed the pets being boarded and helped the staff any time they needed an extra pair of hands.

Meanwhile, her interest in animals continued, but Mary — who was president of her 4-H horse group in high school  — began wondering if she’d prefer to work with horses. So she leaped at the chance to intern with Lake County vet Dr. Linda Galbraith. “When I went with her, I got fully embraced in what she was doing. I didn’t stand on the side and watch. I would hold the IV bag while she did surgery. The first surgery I saw was on a horse in the field when I was 12,” she said. By age 15, she was making rounds with Dr. Galbraith regularly, going from horse barn to horse barn.

As a senior in high school, Mary took dual-enrollment classes at Valencia — and found the instructors warm and welcoming, particularly to a teenager who wasn’t sure if she was ready for college work. She felt so comfortable at Valencia that when she graduated from high school, it seemed like the natural move to continue on at Valencia and earn her A.A. (associate in arts) degree. As she neared graduation, however, Mary longed to transfer to the University of Montana — where she’d already been accepted — but she didn’t have the money.

“I could not remotely afford it,” she recalls, “so I went on Google and looked for scholarships based on academic merit. The first one that popped up was Dr. Pepper.”

The “scholarship” had nothing to do with merit, but didn’t look hard. Mary and the other entrants had to make a one-minute video talking about their dreams of college and why they needed the scholarship money. The video that won an online voting contest would win a $10,000 scholarship. So Mary entered — and urged Valencia students and faculty to vote for her on Facebook and Twitter.

The bad news was this: She finished eighth in the voting and would only receive $2,500 for finishing in the top 10.

“I got a call from the people at Dr. Pepper.  A guy there said, ‘We’re really sorry that you didn’t win… so I guess you’re wondering why I called.”  And I said, ‘kinda.’

He explained that the staffers liked her video — and recognized that so many people had technical problems voting, that they agreed to give her an extra $5,000. So altogether, Dr. Pepper awarded her $7,500 in scholarship money.

“The awesome thing was: I had just been on the phone from financial aid with UM and I had said, I don’t think I can afford to go. I’m $5,000 short.”

So Mary packed up her bags and moved to Missoula, Montana — home of the University of Montana. Today, she’s living in a dorm and enjoying the West.

“I really like the area, the mountains. And they’re very conservation-minded out here,” she says. “Besides, I want to be a large animal veterinarian .. I thought if I’m going to end up somewhere out west for a career, .. I thought I should go out there for my college years and see if I like it.”