Valencia students donate thousands of hours to charity each year, but most of those charities are located here in Florida.

However, thanks to an unusual partnership, Valencia students are bringing light to some places where electricity is rare or expensive – in Third World villages, from a poor village in Guatemala to war-torn Kenya. 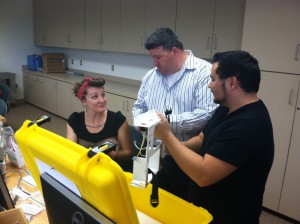 Students in Dr. Deb Hall’s “Introduction to Alternative and Renewable Energy” class (ETP 1501) combined hands-on learning with a chance to make a real difference – by building solar-powered portable generators that can provide LED light and sending those generators to nonprofits around the world.

The project began five years ago, during her sabbatical, when Hall attended a renewable energy workshop in Colorado. There, she met a married couple who had worked in Africa – a former obstetrician and her husband, an engineer.

Alarmed by the number of African women losing their lives during childbirth because clinics were forced to perform emergency medical procedures by candlelight, the doctor and her husband set out to provide emergency power and night-time lighting to African medical clinics. What they created was WeCare Solar, a nonprofit designed to provide solar suitcases – DC-powered, portable power generators that can provide LED lighting to a hospital emergency room.

Inspired, Hall came up with a simple idea: If she could get the money for the equipment, her students could build the solar suitcases – and then donate them to charities or communities in Third World countries where electricity isn’t readily available.

Armed with a $5,000 grant from the Valencia Foundation, Hall bought supplies to create four solar suitcases. The project would be a win-win for both the students and the nonprofits. The students would learn, through a hands-on project, the basics of solar electric generators. And, along the way, her students would help change the world, by bringing power and light to remotely located villages.

For Hall, the suitcase project also turned into a good test of teaching methods. “A lot of our students are kinesthetic, hands-on learners. It seems like that is the preferred way that most of my students learn – as soon as they’re building a circuit and they can see it works – it clicks,” she says. “Then when they are building the cases and they can see the voltage increase as the sun continues to shine, they get it. Hands-on projects are very powerful learning tools.” 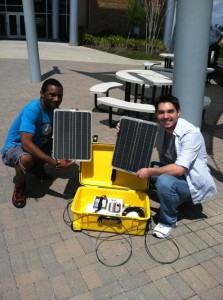 Students in Hall’s ETP 1501 class started the project by watching a video on the WeCare Solar project. Then they launched into the process of building their solar suitcases.
“What I loved about this was they were learning the whole engineering process — and the students’ designs have evolved from the prototype,” says Hall.

“These cases go to medical clinics, orphanages, schools. And in the Third World, where it’s hard to move a generator, these are perfect because they’re portable,” says Hall.

For Valencia student Holly Parrish, the class was fascinating – and very different from the usual college fare. “As soon as (Dr. Hall) showed us the whole website and the little video about what we doing, I got very excited – because I was taking a class in which I wasn’t just learning, but giving back,” says Parrish, whose solar suitcase went to Costa Rica. “It sounds cheesy but on the last day of class, I cried.”

SHARING THE POWER OF LIGHT

Of the four suitcases that Valencia students built, three were safely delivered last year to nonprofits in Haiti, Guatemala and Costa Rica. But the fourth suitcase – which had been destined for Kenya – could not be delivered because of ongoing strife in the country, where Islamist rebels are fighting government security forces.

In Haiti, one suitcase has been sent to an orphanage school to provide the children and their teachers with emergency power for charging cell phones, laptops and rechargeable batteries for headlamps and flashlights. 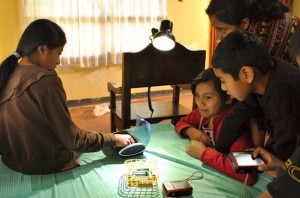 Another suitcase was shipped to Antigua, Guatemala, where the village is slowly being lit by solar power, thanks to the Integral Heart Foundation. In rural Guatemala, the average family spends between $15 and $20 per month on candles. For those with access to electricity, power does not come cheap — costing about $20 a month to run two traditional light bulbs on the national grid. For many, solar would be a welcome alternative.

“We chose to develop our suitcase for the Integral Heart Foundation after researching about the great work being in Guatemala. Our hope is that the suitcase can make a difference and improve the lives of those in need,” wrote Brandon Golbeck and Ajala McLean, two engineering students in the class. “By allowing medical procedures at night to be conducted safely in a well-lit environments, by providing children enough light to complete their homework during the night without the risks of burning candles, or by saving families money from buying candles that don’t provide adequate lighting, … it is our hope to make that future brighter for (children) so they will have an opportunity to make it even better.”

Another of the suitcases went to Rancho Mastatal in Costa Rica. Run by Peace Corps veterans, Rancho Mastatal is an environmental learning and sustainable living center, rural sanctuary and lodge located in and on the edge of the last remaining virgin rainforest of Costa Rica’s beautiful Puriscal County. The solar suitcase enables Rancho Mastatal staffers to demonstrate solar power – and how it can be used to live sustainably.

And this summer, the fourth and final solar suitcase finally made its way to Africa, thanks to Bud Abt and his team from Northland: A Church Distributed, who volunteered to take the solar suitcase on their upcoming trip to Kenya. The Northland team headed to Nairobi, Kenya in late July, where they handed the suitcase over to John Muiruri, Kenyan director of  the Action for Children in Conflict.

Classmates Paul Royal, Diego Pasos and Nicholas Scherer built their solar suitcase for the Kenyan charity, which operates an orphanage school in Thika, Kenya. “It is our sincere hope that this solar suitcase serves as a small token to let you know that, thousands of miles away, there are people who appreciate and respect your efforts to help the children in your community,” they wrote in a letter that they tucked into the suitcase.

Now, after many delays and hiccups, that suitcase destined for Kenya has finally arrived at the orphanage school.

On July 13, Hall delivered the final solar suitcase to Abt and his Kenya Distributed Journey Team. The Northland team then headed to Nairobi in late July, where they met up with Muiruri, Kenyan director of Action for Children in Conflict. From there, the students’ solar suitcase was sent to the orphanage school in Thika, Kenya. 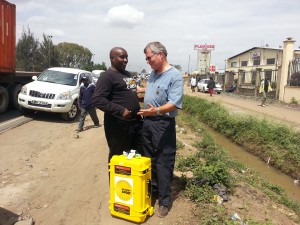 For Deb Hall and her students, the solar suitcases provided an opportunity both to learn and to share.

“We were given an opportunity to do something that we have never done before,” said students Matthew Alday and David Castaneda, whose suitcase went to Haiti, “and it’s a great feeling knowing that we can help other people out in such a special way.”