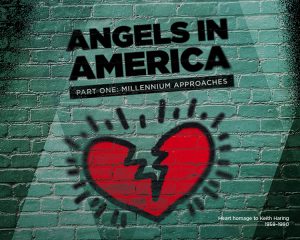 The play, which won a Pulitzer Prize and was later transformed into an HBO miniseries, was written in two parts, “Millennium Approaches” and “Perestroika.” The parts were written so that they could be performed separately or together. The Valencia production will stage Part 1.

In “Millennium Approaches,” set in 1980s New York City, a gay man is abandoned by his lover when he contracts the AIDS virus, and a closeted Mormon lawyer’s marriage stalls. Characters include lawyer Roy Cohn, Ethel Rosenberg, a former drag queen who works as a nurse, and an angel make an appearance.

The production will be directed by Jeremy Seghers.

Valencia audiences may remember Seghers’ 2020 production of the classic Greek tragedy, “The Bacchae,” which he staged as a drive-in play, which audience members could watch from the comfort of their cars. He has also turned heads with his 2019 production of the quirky Simpsons musical, “Mr. Burns, a Post-Electric Play” and his 2017 production of ”Red Black and Ignorant,” a post-apocalyptic drama that he staged in the woods behind Valencia’s East Campus.

Note: The play contains adult themes and language. Children under 8 will not be admitted.