ORLANDO – For the third straight year, Valencia College has cleaned up in RecycleMania’s annual competition. The college won first place in the national competition’s “waste minimization” category for reducing the overall amount of trash and recycled materials during the eight-week competition.

The colleges and universities that took home top prizes in the three primary categories are:

“Reducing the college’s carbon footprint and being environmental stewards has become part of the culture here at Valencia,” said Marty Campbell, superintendent of plant operations at Osceola Campus, who, along with Boris Feijoo, serves as the leader of Valencia’s RecycleMania efforts.

Colleges and universities competing in the eight-week competition are ranked according to how much recycling, trash and food waste they collect. Between the early February kickoff and the tournament’s final day on March 29, participating schools collectively recycled or composted 89.1 million pounds of recyclables and organic materials, preventing the release of 126,597 metric tons of carbon dioxide equivalent (MTCO2E) into the atmosphere, which is equivalent to preventing annual emissions from 24,823 cars.

Although Valencia has won the waste minimization category for three straight years, the college is always trying to improve. This year, the team at Osceola Campus began an experiment using fewer recycling and waste bins, and instead placing larger bins in more centralized locations. The goal is to reduce the amount of commingled recyclable and waste material, the number and cost of plastic bin liners needed, and the time and energy used in collection and disposal.

Complete results for all 11 categories can be found on http://recyclemania.org, including a breakout that shows how schools performed by athletic conference, institution size, state and other groupings. The national winners of each category are recognized with an award made from recycled materials and earn bragging rights. 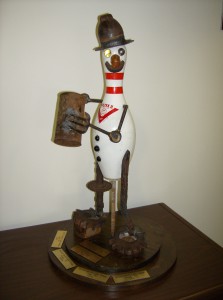 For winning the waste minimization category, Valencia will be the home of the Pin Man trophy, a trophy made of recycled materials, including an old bowling pin.

“With the help of millions of students, RecycleMania competitors have recycled and composted over 277,800 tons of material since the competition first started in 2001,” said Stacy Wheeler president of RecycleMania, Inc. “RecycleMania is a powerful tool for colleges and universities to engage students to improve their community environments and the economy through recycling.”

The competition is made possible with the sponsorship support of the American Forest & Paper Association, Alcoa Foundation, The Coca-Cola Company and SCA.

The RecycleMania Tournament was launched in 2001 as a friendly challenge between Ohio University and Miami University to increase recycling on their campuses. The competition has expanded from two schools in 2001 to 461 colleges and universities in 2014, representing every state, the District of Columbia and Canada. RecycleMania is an independent program of RecycleMania, Inc. Program management is provided by Keep America Beautiful with additional program support from the U.S. Environmental Protection Agency’s WasteWise program and the College and University Recycling Coalition. This year, RecycleMania also partnered with National Wildlife Foundation’s Campus Ecology program and Campus Conservation National. For complete competition details including a list of participating schools, visit the RecycleMania website at http://recyclemania.org.