Valencia College will kick off its 6th Brazilian Film Festival on April 5 with “Gonzaga,” the dramatic, complicated story of Brazilian pop hero Gonzaga and his son, pop star Gonzaguinha. During the weeklong festival, the college will show five films, concluding on April 12 with the U.S. premiere of “Margaret Mee and the Moonflower,” a documentary based on the life of a botanical illustrator who spent 30 years working in the Amazon. 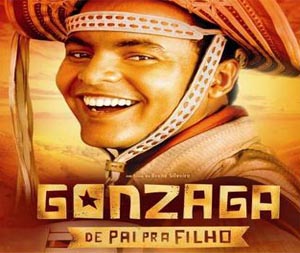 Admission to the film series is free. All films will be shown in Portuguese with English subtitles. Each showing will be held at 7 p.m., and will be preceded by a reception at 6:30 p.m.

Launched in 2008 by Valencia Professor Richard Sansone, who teaches Portuguese and English as a Second Language, the film festival is one of only two Brazilian film festivals in Florida (the other is in Miami). The festival is presented in partnership with the Central Florida Brazilian American Chamber of Commerce and the University of Florida Center for Latin American Studies.

The films in the series were selected by Sansone and renowned Brazilian filmmaker Elisa Tolomelli, who will moderate each showing and answer questions afterward.

In this 2012 drama, filmmaker Breno Silveira tells the complicated tale of two of Brazil’s most popular pop music icons – Luiz Gonzaga, the King of the Baião, and his son, Gonzaguinha. The film details the human drama between father and son and the wreckage that their careers make of their family lives.

The film is rated as appropriate for audience members 12 years and up.

This 2011 biography paints a portrait of the tragic life of one of Brazil’s greatest soccer players, Heleno de Freitas. A lawyer by training, the arrogant, explosive Heleno, scion of a prosperous family, was addicted to both women and drugs. His amazing talent,prowess and determination on the field, however, could not balance the excesses of his lifestyle off the field, ending a brilliant career much too soon.

Directed by Jose Fonseca, the movie stars actor Rodrigo Santoro, whose portrayal won Best Actor awards from the Havana Film Festival, the Lima Latin American Film Festival and the Premio Contigo Cinema of Brazil. The film is rated appropriate for audience members ages 17 and up.

Brazil’s submission for the 2011 Academy Award for Best Foreign film, The Clown tells the comedic adventures of a father and son who work as clowns in a vaudevillian circus that tours the Brazilian countryside until son Benjamin, the unhappy clown, decides to abandon his family in favor of a more stable path. Viewers are treated to exquisite cinematography that contrasts starkly with the extreme poverty of the locations visited by the rag-tag group of performers.

The film, directed by and starring Selton Mello, has won 28 awards at international film festivals. The film is rated appropriate for audience members ages 14 and up.

This refreshingly hip action thriller stars Fernando Pinto as the protagonist Edgar, who, approaching his 30th birthday and the end of his patience, concocts a vigilante solution which pits a criminal gangster against a corrupt politician. His brilliant plot to get the forces of evil to face off with one another takes the audience on an adrenaline-pumping roller coaster ride.

Directed by Afonso Poyart, this high-tension action film is rated appropriate for audience members ages 16 and up.

Join Producer Elisa Tolomelli as she takes filmgoers on a trip up the Rio Negro to meet one of the pioneering champions of Amazon forest preservation, the famed British botanical artist, Margaret Mee. Directed by Malu De Martino, the film takes viewers on a sumptuously rich visual and auditory sojourn to the Amazon forest in the company of the diminutive yet courageous Mee.

Much of the footage was taken during Mee’s last trip to the Amazon, after a hiatus of 15 years. Mee’s odyssey to observe and to paint the elusive moonflower — which only opens one night of the year — is one of the many visual delights captured for the viewer. Through her diaries, interviews and narratives encompassing 36 years in Brazil, this documentary reveals a tireless advocate for the preservation of Brazilian flora, whose love of nature reminds us of the need to preserve our environment.

This film is not yet rated, but is deemed appropriate for all ages.

To view trailers, get directions and learn more about the films, please visit:  http://valenciabrazilianfilmfest.com/